The NonVerbal-Behavior-Generator (NVBG) is the module that generates behavior other than speech, such as gestures, facial expressions and gazes. The NVBG generates these behaviors based on the speech input and other messages that it receives. Nonverbal behaviors augment and emphasize spoken communication. Based on who speaks and who listens, the NVBG can characterize the NPC as a listener, speaker or a bystander and generate appropriate behavior. These behaviors are configurable using xml files provided as input to NVBG. Using these xml files, we can specify which words or parts-of-speech trigger which animations. We can specify idle animations and idle gazes that get triggered when the character is idle for a specified amount of time.

The NVBG is loosely coupled with a "parser" which gets the input sentence from NVBG and returns the parts of speech in the sentence. NVBG can extract information from the lexical, syntactic, and semantic structure of the surface text that can support the generation of believable nonverbal behaviors.

The NVBG also has a saliency map which it uses to keep track of it's environment, important events and conversational topics. This helps the NVBG generate behaviors that are appropriate to the current scene and helps it prioritize. This saliency map is configurable through xml files too.

The NVBG also allows us to configure facial expressions for a particular character using FACS units and then based on xml tags in the input messages, can trigger those facial animations. 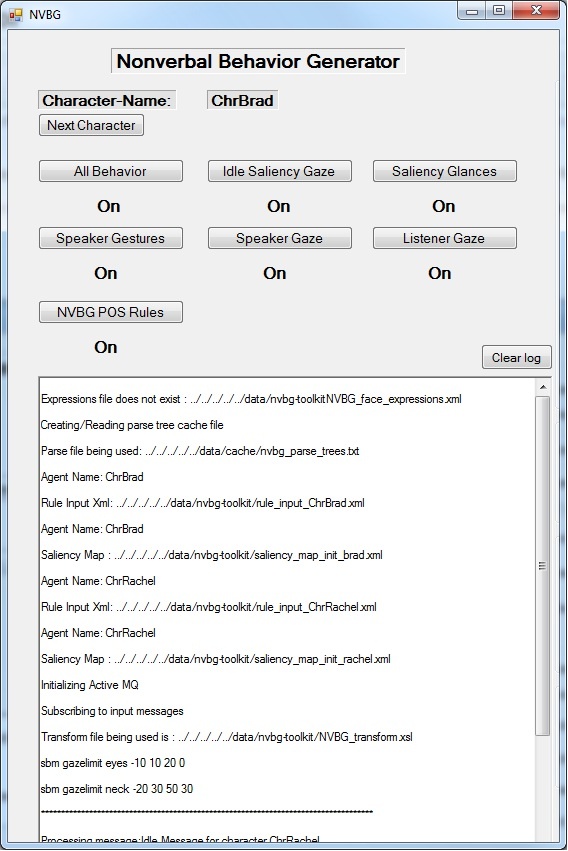 The NVBG now supports multiple characters within one process. You can toggle between these characters as desired.The character itself needs to be configured using the various configuration options that NVBG provides. You can do this using a config file or through VHMessages.

In order to configure NVBG for a particular character, you need to have/setup the following:

You can use a config file which you can specify as a command line argument to NVBG, in order to define a character. The structure of the config file is as below:

As we can see all the information required to configure a character can be specified in the config file. 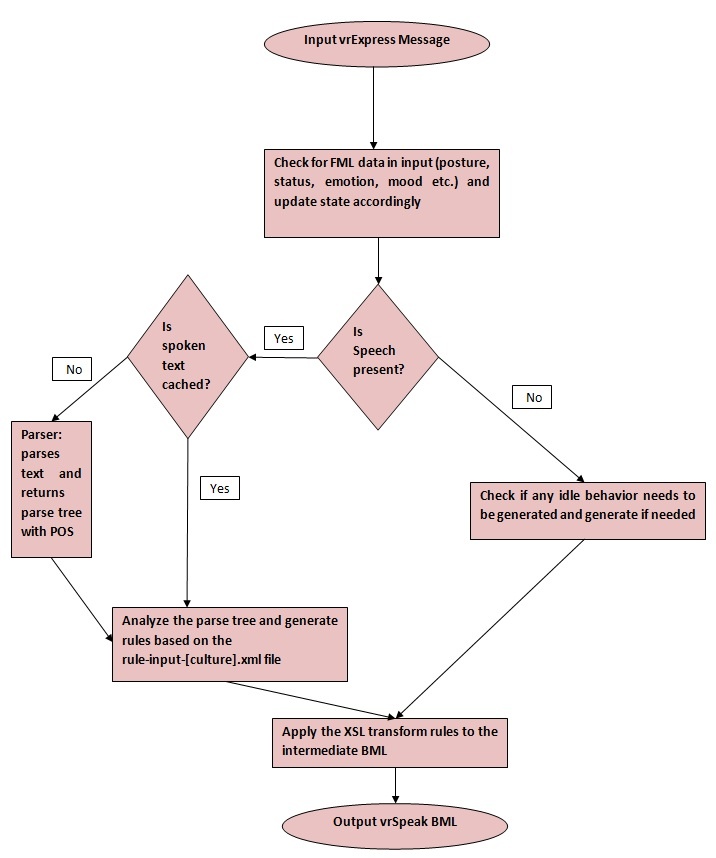 The rule-input-[culture].xml file contains the rules that map certain words or parts of speech to animations. You can also specify any idle animations that you want to trigger when the character is idle for a certain period of time.

The xml code below shows how we can map a word to multiple animations which are then picked by random by NVBG when that word is spoken.

The pattern <tag> contains the word that is to be matched, and the <clip> tags contain the animations which should be played when that word is spoken. The <posture> tag is used to set animations for each character posture. Only animations that are in the current characters posture will be played by NVBG. The 'priority' attribute allows NVBG to prioritize between animations when multiple one's overlap.

The rules for parts of speech are similar as shown below.

Notice that, in the above case, no animations are specified (although they could be). In this case, the NVBG checks the spoken sentence for parts of speech (first_NP, noun_phrase etc.) and inserts place-holder xml tags with the keyword as specified in the rule. Later when the NVBG applies the XSL transform to the intermediate BML(with the placeholder tags), it generates output behavior based on what the XSL rules specify (More on this later under the "POS Transform rules" section).

So basically the rule input file is a collection of these rules that the NVBG parses at runtime. Based on whether animations are directly specified in this file as <patterns> or whether they are specified further down the pipeline in the XSL rules, the NVBG generates appropriate behavior.

If you want idle animations to be generated, you can specify idle_animation rules as below

The above idle_animation rule is parsed just like the other rules and is inserted in the output bml when the character is idle.

The saliency map specifies which objects/characters/pawns in the environment are important to the character and in what priority. These priorities can vary based on what story-point we are at i.e. certain objects become important only later in a scene.

Based on the priorities of these objects, the saliency map generates idle gazes and other actions based on spoken sentences and events.

As we can see, the saliency map can contain multiple story-points each specifying which objects in the scene are of importance for that point in the story or scene. So if NVBG is notified of a change in the scene/story, it can update the saliency map accordingly. The above example contains only one story-point but in general it can contain many. NVBG can be notified of which story-point it should load so that the appropriate priorities are assigned to the objects in the scene.

The relation between spoken words and objects in the scene can be specified with the <keywordToObjectMap> block, which contains the keyword and specifies which pawns map to it. When the character speaks those words, NVBG will make him/her gaze towards the pawn. This generates the impression that the character is aware of his environment.

You can also specify the emotion of the character using the <emotionInit> tag as shown. This emotion value can be used to change behaviors of the character, such as idle animations, facial expressions etc.

These are control messages to set options for NVBG. They are as shown below:

nvbg_set_option [char-name] saliency_glance true/false - sets/unsets flag that allows saliency map generated gazes. These gazes are based on content in the speech tag and the information in the saliency map.

nvbg_set_option [char-name] nvbg_POS_rules true/false - sets/unsets flag that allows behavior to be generated based on parts of speech returned by the parser.