VHBuilder is a tool that allows you to quickly author and review verbal and nonverbal behaviors for one or more characters. It is aimed at quickly getting basic characters up and running; power users can then move on to using the NPCEditor or NVBG directly for more fine-grained control.

It abstracts the end user from individual components of the Toolkit pipeline and offers a go-to place for easy authoring of characters.

The VHBuilder application requires the user to either create or load a scenario before authoring the virtual human characters. A scenario is basically a sandbox which includes all the files and data associated with it. Click on the File menu option on the top left and select the 'Create Scenario' option as shown below 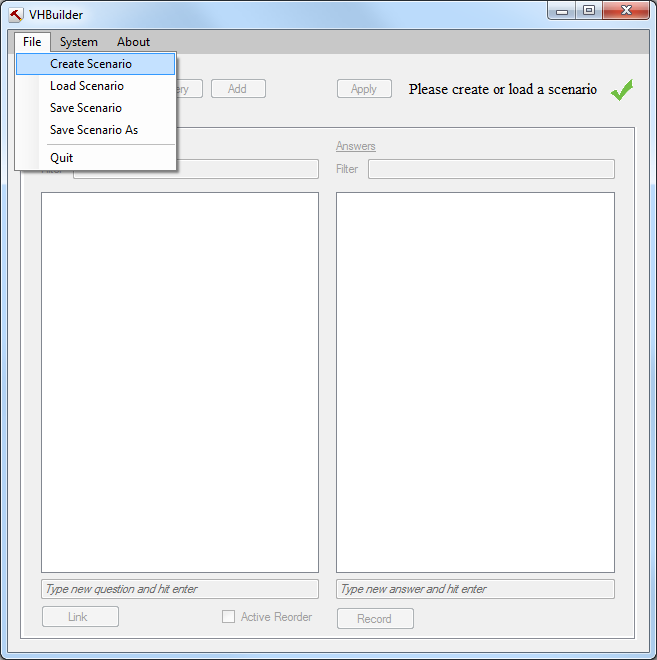 On selecting the 'Create Scenario' option, you will be presented with a dialog as shown below. Please type in the name of the new Scenario you want to create, select where you want to create it and select 'Save' as shown. On hitting 'Save' above, it will create a scenario and it will also launch all the components required to create the new scenario. 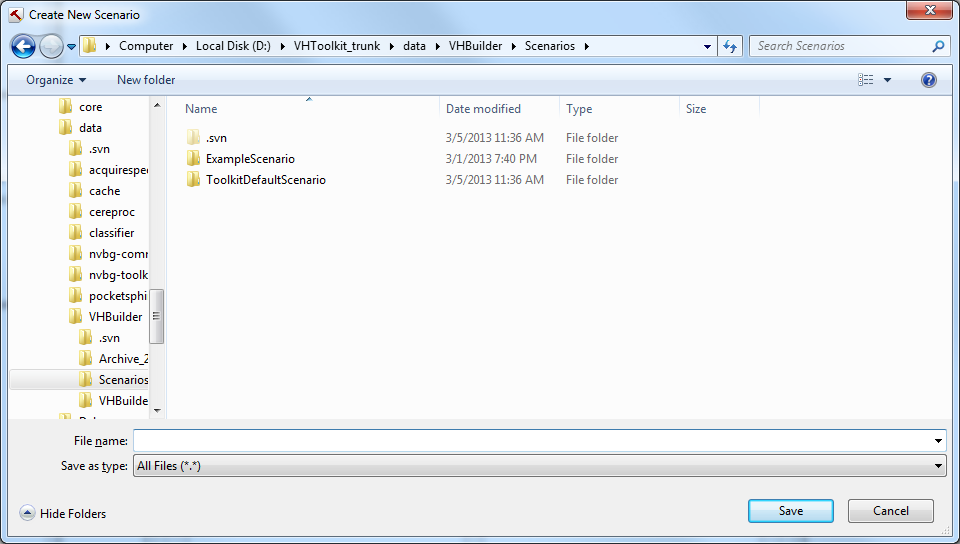 On creating the scenario, the VHBuilder tool will launch all required components and while it is doing so, it will indicate that background processes are running, using the indicator on the top right (as shown below) Once it is done loading the scenario, it will indicate that it is ready, again using the indicator on the top right as shown below. Adding/Querying characters to the scenario

You cannot begin editing the scenario unless you add new characters to the scene. In order to do this, you can use either the 'Query' or 'Add' button as shown below. 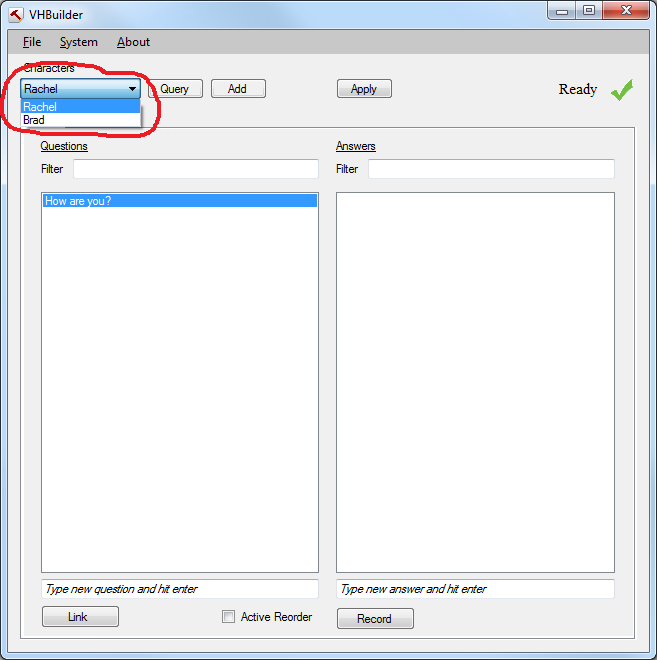 If you don't have a Unity instance running, another way to add the characters is hitting the 'Add' button next to the 'Query' button. This will pop up a window as shown below

You can type in the name of the character you want to add and it will get added to the VHBuilder's list of characters just like the 'Query' button does.

You need to hit the 'Apply' button in order to apply the changes that you make (characters, questions, answers, behaviors etc.). On hitting the 'Apply' button, the tool will create a language model, classify the NPCEditor and initialize NVBG with the current scenario. Every time you make a change to the scenario, the Apply button will turn red as a reminder that you need to press it to see your changes. Adding a question and answer Linking a question to an answer

Once you have added the question and answer, you can link them together by selecting them and clicking the 'Link' button as shown below. You can select multiple questions and answers at the same time and link them as shown. Recording the audio for an answer

In order to record audio for a newly added answer, first select the answer by clicking on it. This will highlight the answer. Now hold down the 'Record' button and speak into the microphone and release the button when you are done speaking. 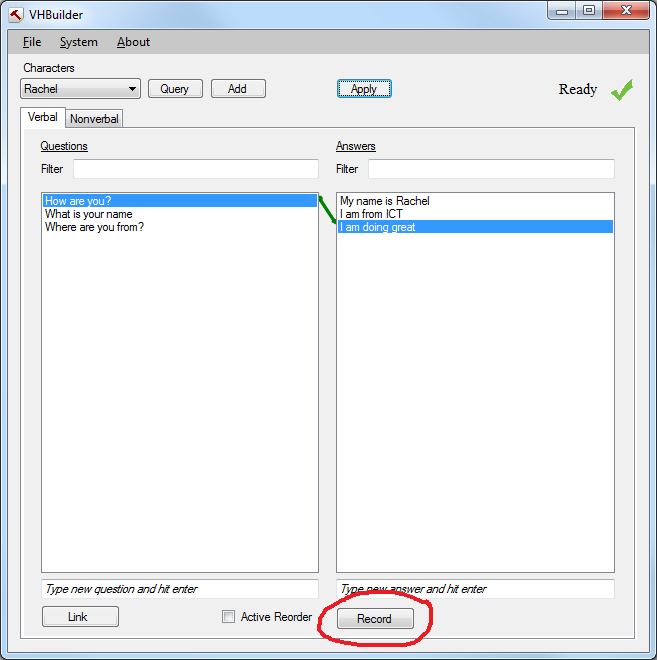 On releasing the 'Record' button, you will see a window popup as shown below. This generates the bml with the lipsync for the audio you just recorded. Please wait until the tool indicates otherwise. Once the tool indicates it is done, the audio has been recorded and the lipsync generated. You should now be able to ask the corresponding question and hear the character respond in the recorded voice.

In case you don't have FaceFx installed on your machine, the window you see will look different as VHBuilder will default to using the VisemeSchedulerSOX tool instead which is our in-house tool for generating basic lipsync. A 'behavior file', contains the mapping from the spoken words to animations. For each character, you can select the 'behavior file' that you want to use for that character from the list of available files in the drop-down list. e.g. in the example below, we have selected 'rule_input_Rachel_template.xml' for the selected character 'Rachel'. Once you select the behavior file for a character, the tool will remember it. 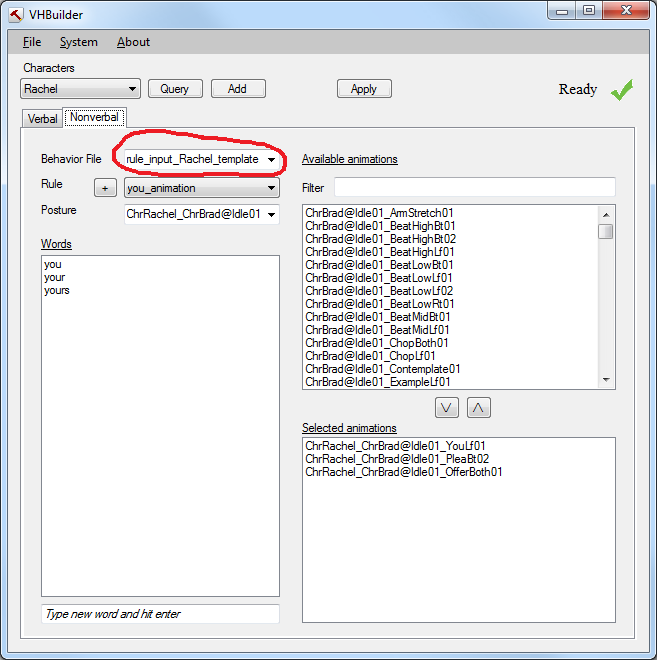 Now you can add words that will trigger this rule under the 'Words' section by typing the word in the text-box and hitting the enter key. You are also able to select the animations that will be triggered when the character speaks that particular word, by clicking on the animation name and selecting it. The list of selected animations for a particular rule is displayed in the bottom right as shown. 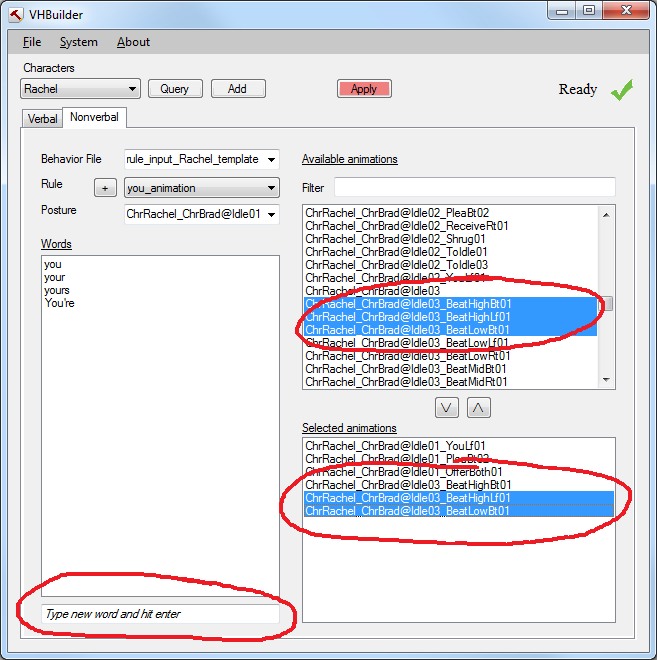 a) The character only performs the animation when the words in the 'Words' list are spoken and he is in the specified posture.

b) You can select multiple animations from the 'Available animations' list by holding down the 'ctrl' key and clicking on them.

c) If you have Unity running with the characters loaded, you can double click on the animations (or select a posture) and see how they play on the character.

d) You can select and hit enter to add animations and hit delete in the 'Selected Animations' list to remove animations.

You can add a new rule by hitting the '+' button next to the Rule drop-down list. This will pop up a dialog box as shown below. Enter the name of the new rule. Hitting OK will create a new rule and you can go ahead and add words to this rule and select animations for it. Rule names are mostly for organizational purposes allowing you to have different rule names for different set of words. 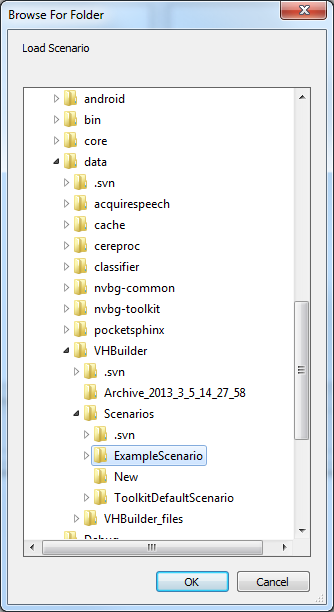 During this interval, the tool should indicate that it is busy loading. It does this using a 'wait' image on the top right as shown below 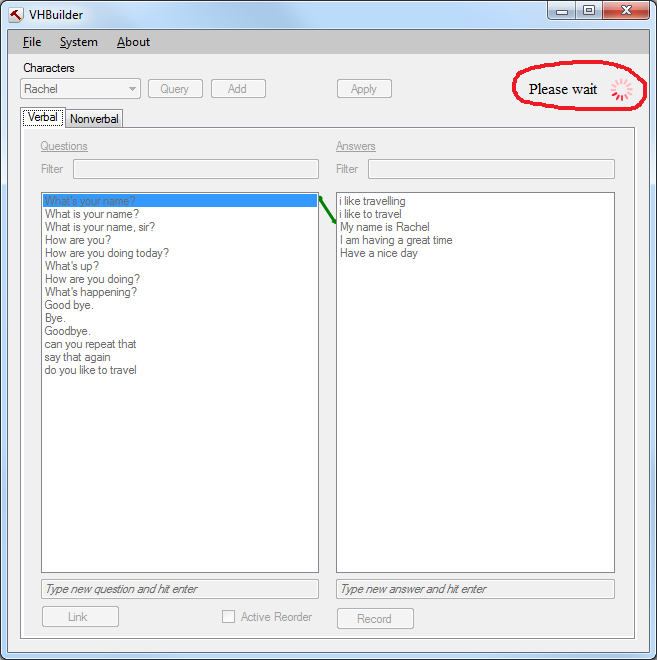 Once the scene is loaded and all the components are initialized, the tool will indicate that it is ready as shown below. 1) In order to save the scenario and all the changes made to it, select the File menu option and hit the 'Save Scenario' as shown below In case of unexpected functionality, a good way to check if all background components are functioning is to ping them and make sure they are running. This can be done using the 'Ping' menu option. If all components are running fine, then the VHBuilder tool will indicate so. If any component is missing, then you will be notified of this. If for any reason, one of the components fails to function or exits you can relaunch the components using the 'Relaunch' menu option as shown below. This can be used to restart the system with all components functioning in the background. Flow of messages sent in order to record speech and generate audio file and bml:

Message sent out on posture change

Message sent out on adding question

Message sent out on adding answer