vhAssets is a collection of redistributable Unity package files:

Functionality that the vhAssetsPackage provides:

Upgrading .unitypackage files is a little more difficult.  This quote from the Unity docs explains it:

"For the cleanest possible upgrade, it should be considered to remove the old package contents first, as some scripts, effects or prefabs might have become deprecated or unneeded and Unity packages don't have a way of deleting (unneeded) files (but make sure to have a security copy of the old version available)."

The easiest way I've found is to use the approach the SVN docs recommend for vendor branch upgrades.

Through the Unity Editor, many variables of vhAssets script components can be customized

Captures all SmartBody and Unity log ouput and display it to user. Also can be used to send commands. Type '?' for a list of available commands.

Interfaces with SmartBody.dll to provide SmartBody character animation to unity

Interfaces with VHMsg that allows communication via strings between processes

Creating your own Project using the vhAssets Unity Package

Creating your own Virtual Human (Smartbody)

The easiest way to use your own Virtual Human is to create a Unity Project using the included .unitypackages as a starting point.  From here, you can add/change features on the default character, or bring in your own and customize using the existing character for reference.

Every character should have a script associated with him which specifies the attributes of the character. This class is derived from the SmartbodyCharacterInit class.It specifies the following parameters

The character can use audio files on a per utterance basis, or it can use a TTS generated voice. If using audio files, the voiceType parameter in the above mentioned configuration will be set to 'audiofile' and the voiceCode parameter will point to the folder containing the sound files for the character.

e.g. in the case of the character Brad, His voice files are under the folder "Sounds". This folder contains the audio files and the corresponding .bml and .xml files which are the lipsynch schedule and the non-verbal behavior respectively.

When Smartbody cannot find audio files, it defaults to the TTS voice and uses the voice you specified as the characters voice.

Smartbody has the capability of online retargeting motions built for one character to another.  This can be done in two steps.

Creating your own Virtual Human (Mecanim)

A new scene entitled "mecanim" has been added to the vhAssets package which displays 2 of the Brad character, one driven by the Smartbody animation system and the other by Unity's Mecanim animation system.  This scene is currently in development but can be used as a guide for how to setup a mecanim character. This scene needs to be loaded through the MainMenu scene to work properly. Alternatively, you can manually activate the SmartbodyManager, VHMsgManager, and DebugConsole objects. 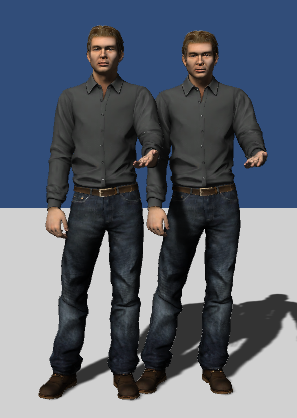 Use the UI menu on the left side of the screen to test animations, nods, gazes, saccades, and lip sync.

Add a new command callback for an arbitrary command

To use the console, at run-time hit the ~ key. Type '?' and hit enter to see a list of commands. If you used the code above in your script, you should see "some_command" in the list. Note, you can pass additional arguments with these commands.

Send arguments with a command while typing in the console

You can customize the build process by creating and modifying a BuildSettings.xml file.

You can create a config .ini file in your project and read it using the IniParser class